How To: So you’ve gotten yourself a macro lens for your DSLR…

…and your first impulse is? Make photographs of flowers!

Fair enough. Flowers are pretty, colorful, and chock-full of photographic opportunity. They’re also a macro subject that’s much more forgiving than bugs; provided it isn’t windy, they’ll stay perfectly still for as long as you need them to be. The problem is, coming from your kit or prime lenses that have a limited close-focus distance, you’re used to only making straight-on, centered photographs like this:

Technically speaking, there’s absolutely nothing wrong with this photograph. There’s a lot of cool detail on both the anthers and petals from the thin depth of focus and droplets from a rainstorm. Exposure is accurate, and the white balance is correct by metering from a gray card.

Other than that, this photograph is kind of plain. Aside from the thin field-of-focus, there’s no sense of depth or perspective, composition is awkwardly centered, and some of the background leaves are pretty distracting. This photograph isn’t making use of what a macro lens can do. In fact, this shot was purposely taken at about the same close-focus distance that most 100mm lenses end up at. As such, just about anyone can make this photograph with just about any lens. I’d be willing to bet a shockingly similar photograph to the one above is somewhere out there on the internet.

You bought a macro lens, didn’t you? Why not take advantage of its closer-focusing capabilities?

So let’s do just that, with the same general perspective, but focused MUCH closer:

Okay, now things are starting to get interesting. By focusing all the way to 1:2 magnification, critical focus falls upon only a few of the anthers, while the interior and petals of the flower form a pleasing, blurred-out background of warm colors. This photograph can already be taken for a great one without much fuss, though a couple issues crop up, at least for me. For one, due to the extremely thin depth-of-field, only a couple of anthers can be in focus (three or four would have been better). Besides that, much of the composition is still pretty centered, without any observance of the rule-of-thirds; a square crop might have helped with that.

Alright, so still focusing pretty close, let’s mess around with the angle a little bit to make a more involved composition. Now, I want to try to see some more detail of the stigma here: 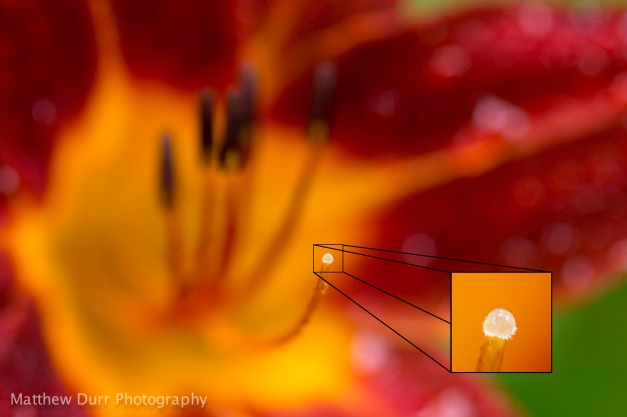 More progress. At least, creatively speaking. Unfortunately, the stamen on this particular flower is too small to really separate itself from the rest of the photograph. Perhaps focusing even closer would have helped—had I remembered to bring my PN-11 extension tube along with me. However, I do like this composition. Let’s see if I can try getting most of the flower in-focus again, while still creating depth in the photograph:

Ah…finally. This photograph combines the elements of the previous photographs I wanted to keep, and takes care of problems I had with the others as well:

When you go out photographing with a macro lens, sometimes you may find yourself wanting to fall-back on previous habits formed from your non-macro lenses. Resist that urge. Try to push the capabilities of both your lens and your compositional creativity. Do your best to make a photograph that only you could make, or at the very least, one that would be extremely difficult for anyone else to replicate. Making a compelling photograph of a flower is a challenge, but with careful patience and thought, multiple possibilities and angles should open up to you.

Here’s a few more examples of “something different”:

Brand New
105mm, ISO 100, f/11, 1/5, 1:2 Magnification
Contrasting a fully bloomed flower with a tightly-wound bud creates a dual element of mystery and knowledge of what’s to come. The out-of-focus stem gives the photograph a sense of place and scale, and the shaped out-of-focus highlights (from the aperture) add a bit of artistic flair.

Spiraling
105mm, ISO 100, f/2.8, 1/160
A common sunflower, but photographed up-close with the central spiral placed on the intersection of two rule-of-thirds lines. The large aperture creates a surreal sense of depth combined with the contrasting micro-flowers and spikes.

Cluster
105mm, ISO 100, f/5.6, 1/6, 1:2 Magnification
Many flowering weeds produce very intricate details that can only be viewed at macro distances. Try using a center, square crop combined with a cluster like this to produce the illusion of a small group of flowers, despite the fact that these all stem from the same bud.

All photographs made with the 105mm f/2.8 AI-s Micro-NIKKOR and the Sony NEX-7, often with the help of a tripod.

That’s all for this flower macro how-to, guys and gals, thanks for dropping by!

4 comments on “How To: So you’ve gotten yourself a macro lens for your DSLR…”