Cameras with an APS-C sized sensor are generally not thought of as low-light performers. Despite recent gains in 16 megapixel APS-C technology (NEX-5n, Fuji X-Pro 1), digital noise due to tiny pixels not getting enough light can become a problem at high ISOs starting at about ISO 3200. When packing a 24 megapixel sensor of the same size, these even smaller pixels are all the more susceptible to image degradation. On my NEX-7, I have generally stayed away from low-light (handheld, anyway), simply out of the fear of a low signal-to-noise ratio at high ISOs. But when the job calls for it–an acoustic/electronic music show hosted in a bar–pictures have to be made, so I grabbed my Nikon 50mm f/1.4 S-Auto, and went to work. 🙂

To give an idea of the (lack of) stage lighting, this guy’s computer was illuminating him more than anything else in the room! 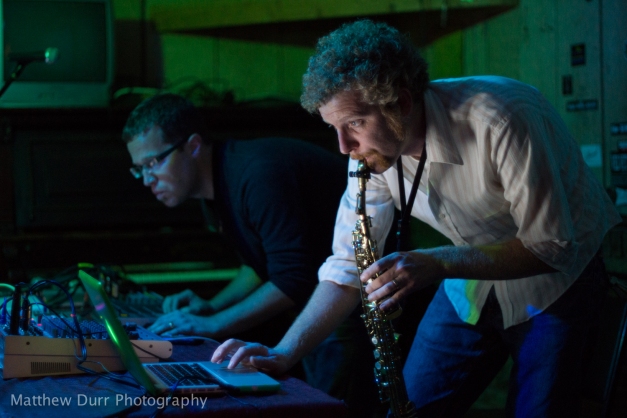 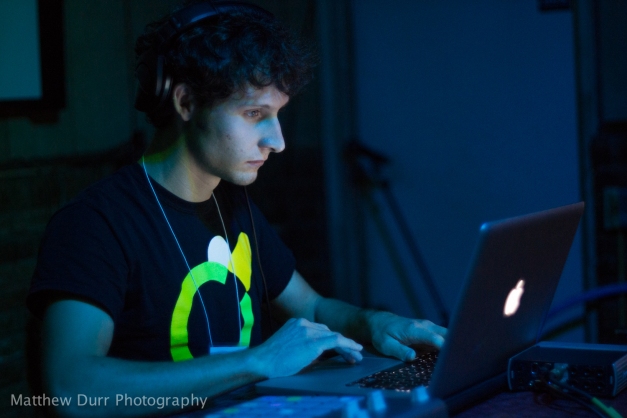 You’ve got to watch those slow shutter speeds. 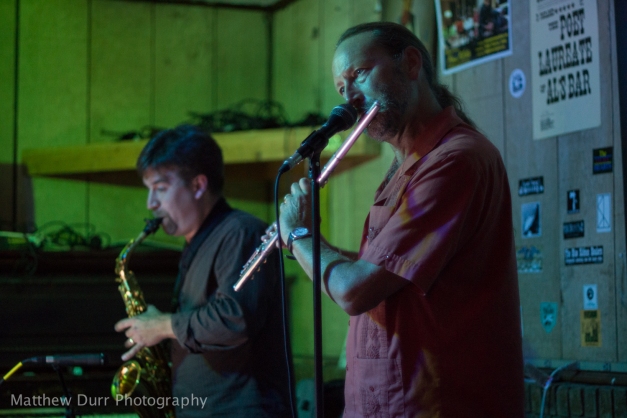 At the pixel level, these shots are noticeably noisy (and rightly so). Fine detail isn’t really present, but then again, shooting at f/1.4 really softens up the image anyway. What’s surprising is at the image level, where I tend to show all my photographs at 1500×1000, they look just fine. Noise isn’t distracting, even considering the fact I didn’t apply any noise-reduction in post-processing. The simple act of downsizing the image is enough to mitigate this problem.

In times like this I realize the saying of “gear doesn’t matter, except when it does” really rings true. Here, it’s all about the lens: if it wasn’t an f/1.4, shutter speeds would dip even lower (well below reasonable hand-holding even with good technique) or ISOs would skyrocket to at least 3200 (image-level degradation would start to become noticeable). Plus, I would get less subject separation. That’s a personal qualm, though. 🙂

On another interesting note, I found the flash of the NEX-7, which is attached via a flexible metal hinge, to be extremely useful for impromptu bounce-flash work. It’s a “feature” I love to exploit in the few situations that call for it. To activate “bounce mode”, simply pull back the flash to point at the ceiling with the forefinger, and trigger the shutter with the middle finger. After one or two test-fires to nail exposure (shooting in manual mode works best), reasonably good ambient light can be created. This method is much better than any direct on-camera flash method I know of. In this example, had I used direct flash, the subject’s face would have been completely blown out, the background would remain dark, the glasses would have an annoying reflection, and the amount of red-eye would be insane (thanks to the darkness, the pupils are huge). Bounce-flash to the rescue: 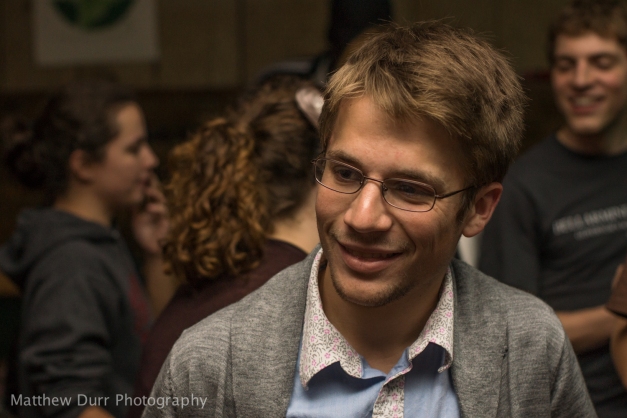 In all honesty I’m pleasantly surprised with the high-ISO performance of the NEX-7. With my habits of shooting fast primes either handheld or on a monopod, I now know I can always afford to stay at or below ISO 1600. When the lights go down, bring it on! However, I’m sure something like a 24 megapixel full-frame mirrorless camera, like a NEX-9, could allow me to shoot at any ISO I dreamed of with no consequence. Hint-hint, Sony. 😉

That’s all for this post guys and gals, thanks for dropping by, and as always, have a great day!