A Slew of Big Announcements (and a Poll)

To make a long story short, Sony is getting ready to make many, many announcements for updates to their alpha, NEX, and camcorder line-ups. It was supposed to happen at 5 a.m. London time (15 minutes after this post was written),  but the good ‘ole guys at Photographic-Central seemed to have spilled the beans an hour early.

Though the full-frame a99 DSLT, full-frame RX1 (world’s first compact FF camera), NEX-6, and (most likely) the full-frame VG-900 camcorder all look very nice, I was looking forward in particular to the three rumored e-mount lens announcements to accompany the cameras. Thankfully, the rumors were right. In Sony’s press release, there will be a 16-50mm f/3.5-5.6 pancake powerzoom, a 10-18mm f/4 ultrawide zoom, and a compact 35mm f/1.8. What’s so special about these lenses (despite their obvious specs), is all three will have OSS (Optical Steady Shot).

From some reviews I have seen of current e-mount lenses with OSS, the shutter speed advantage it can give a photographer while handholding seems to fall in-between 2-3 stops. Here’s the kicker, a 35mm f/1.8 will have OSS. This lens will most likely become the ultimate low-light tool for NEX photographers. By following the 1/focal length (in 35mm FoV) rule, a 35mm lens (on APS-C gives about a 50mm FoV) shouldn’t be handheld at shutter speeds less than 1/50. Well, with OSS on, if three stops of shutter speed advantage are given, it should now be safe to shoot at a ridiculously slow 1/13 of a second. With good technique and shooting in burst mode, one could probably push that shutter speed a bit lower. Keep in mind though, any moving subjects will be blurred at these kinds of shutter speeds (OSS doesn’t stop motion, unfortunately).

What should this lens mean for people like me? I’ll now have a fast “normal” lens that is supposed to be very compact (even more-so than the 1-stop slower 35mm f/2.5 E), providing good depth-of-field control as well as fantastic low-light capabilities by keeping ISOs low. Here’s to hoping the lens actually performs well at the larger apertures, eh?

Here’s a picture of the 35mm f/1.8 (mounted on the new NEX-6), taken from Photographic-Central: 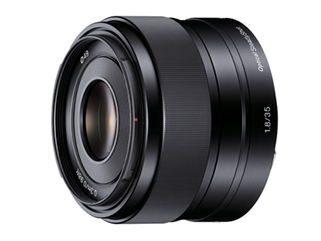 All this said, I present a question to everyone, which lens in the e-mount announcements would you like to see reviewed first? I for one will be putting in a pre-order for the 35mm for my NEX-7 as soon as I can, but depending on what my readers want, I may reconsider. Sound off in the comments and/or answer in the poll below!

UPDATE: Amazon has just allowed pre-orders to start for all three of the new lenses (Adorama and B&H should follow soon). The voting is close between the 35mm f/1.8 and the 16-50 PZ, so I went ahead and pre-ordered both for now. 🙂

2 comments on “A Slew of Big Announcements (and a Poll)”