Update: Fotodiox has since changed the physical dimensions and functions of their Nikon PRO adapter since the writing of this review. Per my request (that’s a story in itself), they have added the addition of an aperture control ring, a feature that is sorely missing on this reviewed adapter for Nikon G-type lenses. Unfortunately with this new design choice, the tripod mount had to be removed. This means heavy lenses that don’t have their own tripod mount (such as the 180mm f/2.8 AI-s ED) will put much more strain on your NEX’s mount. However, Fotodiox has assured me that the new PRO adapter retains the same level of quality as the older version, so many points in this review should still apply. Seeing as I do not own (nor plan to own) any G-type lenses, I will not be purchasing the new version any time soon.

Firmly attached to my NEX-7 in all my lens reviews, the Fotodiox PRO Nikon F to Sony E lens adapter is one of the multiple adapter choices NEX shooters have to attach legacy lenses to their E-mount camera of choice. When I say multiple, there are literally dozens of these on Amazon and eBay ranging from cheap $10 adapters to the $300 Novoflex, made in Germany. This particular version, which currently sells for $59.95 on Amazon (I got mine for $49.95 on sale), sits closer to the bottom price range. Fotodiox also manufactures a number of other PRO adapters for different lens mounts (Canon FD, Minolta MD, and even Leica M) that I hope are of the same level of quality as this adapter reviewed here.

These “dumb” adapters feature no electrical contacts of any kind to the camera. To that note, there is also no auto-aperture, meaning modern AF-S Nikkors will remain fully stopped-down. To use a lens at the aperture of your choice with this adapter, it must have its own aperture control ring (some adapters available have an aperture control ring, but there is no way of knowing which f-stop the lens is at). Lenses ranging from the old Nikkor-Kogaku’s to the AI-s’ to the AF-D’s will all function properly. Full metering is possible in M and A mode, while S mode is essentially manual with the option of auto-ISO. Focusing can be acquired at the aperture of your choice, depending on your lighting conditions. 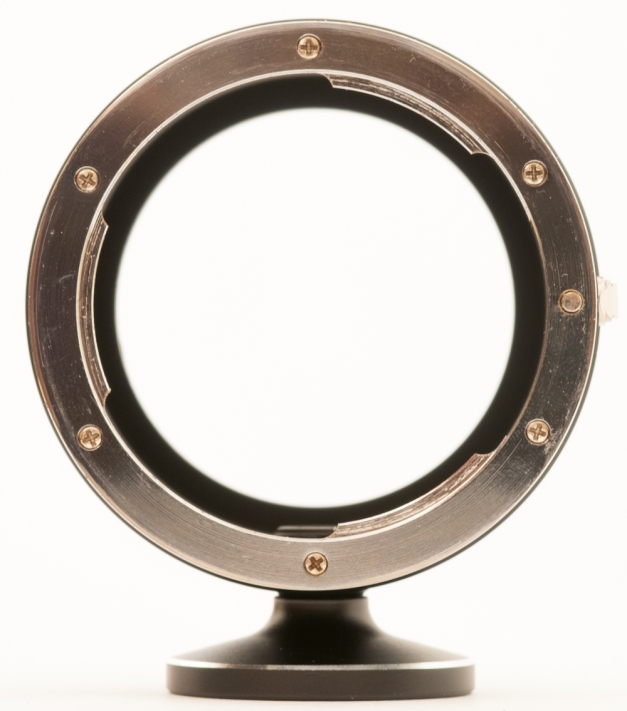 Nikon F Mount, after hundreds of mounts with my Nikkor lenses, only a little bit of wear is visible.

Basic features of this adapter are an all metal construction, a solid screwed-on metal mount on the Nikon side, a detachable screw-on tripod mount, and a slide-back release for unlocking the Nikon lenses. That’s about it really. Nothing to complain about though, simple attachments like this do not need any frills. So, why would one choose this adapter over the plethora of cheaper options available? The simple answer is quality control.

Sony E Mount, it’s still metal, just not shiny like the Nikon end. The little notch in the bottom right is where the locking pin goes from the camera’s mount.

All of the moving parts (Nikon locking pin, tripod mount) are extremely tight, and they have maintained this feel five months after heavy use. Fotodiox advertises “Zero Play” with this particular adapter, play being any unwanted movement between mount/lens or adapter/camera. For the Nikon mount, this claim has held true, once a lens locks in, it stays put no matter what. I have heard from multiple forums the cheaper adapters’ mount can get loose over a short amount of time (~1 month). The problem can sometimes be remedied via user-adjustment of the screws in the mount, but this process can be prone to error; if the mount is over-tightened, lenses may not mount properly. Unfortunately, on the Sony side, a little bit of play has developed between the adapter and the camera’s mount. It isn’t much, perhaps just a fraction of a millimeter, but the play can be felt whenever I’m focusing a lens with heavy damping.

I need to reiterate I have put this adapter through much more punishment than it was probably designed for. I’m talking about accidentally swinging a mounted 5.3 pound 300mm f/2.8 AI-s around a few times. As long as you are either super careful, or avoid ultra-heavy lens usage, I doubt you’ll ever develop adapter-to-camera-mount play with this Fotodiox.

An included felt storage pouch is a nice touch, though I found it has a better use housing the 50mm E. The material does have a nasty habit of attracting dust, though.

As far as recommendations go, this Fotodiox would be a great value for photographers with any Nikon lenses with an aperture control ring who mount them frequently in short periods of time. The metal mount on this particular adapter mounts lenses just as smoothly as the mount on my Nikon d300. For those who have many AF-s Nikkors (on that note, any Nikon-mount lens without an aperture control ring), or don’t change lenses all that often, there are multiple different options available, at many different price points.

That’s it for this quick review guys and gals, have a great one. 🙂