Yet another lens from the super-lightweight, ultra-compact, and bargain-bin cheap Nikon Series-E’s, the 100mm f/2.8 E so far has been a joy to shoot, almost as much so as the 50mm f/1.8 E. It shares all the same qualities of the other Series-E lenses, such as the black body, super-smooth focusing, and solid (yet plastic) build, but there is something different about this lens. The 100mm actually does very well wide-open, an attribute I wasn’t expecting after my times with the other three primes I have reviewed so far in the same series. As some may already know, wide-open performance is a big deal to me; I not only love to see sharpness (though it isn’t everything), but primarily, shallow depth of field photography is a style I have come to embrace. About the only times I stop down my lenses are if I: 1. Have to lower the shutter speed in too-bright light (such as trying to shoot at f/1.4 in daylight) 2. Need a larger depth of field for product shots (the shot above was taken at f/13, for instance) 3. Want to do a landscape (unfortunately those are few and far in between) and 4. The here-and-then moments I need critical sharpness for extreme cropping (the bee shot as one of my headers is one example). Other than that, when everything is blurred but the subject, that’s my realm of photography. 🙂

Back to the lens though, I believe I can say (so far, anyway) the 100mm f/2.8 E is one of the “sleeper” optics I was looking for in the Series-E lineup. I have only spent one day of shooting with the lens. However, it was at a Renaissance fair (yes…cliché, I know), and I shot over 900 pictures all at f/2.8. If that’s not a torture test for a lens’ performance wide-open, I don’t know what is. So many things can go wrong. Since more light is coming in, flare will be more problematic (which it is, though only in direct light, so far). Sharpness should be low (though it’s not). Finally, purple fringing should be terrible (it wasn’t).

The problem I am in right now is deciding which lens I like better, this one or the 105mm f/1.8 AI-s. They both cover essentially the same field of view, but there are some key differences between them. Of most importance is the stop-and-a-third shallower depth of field gain of the 105mm over the 100mm due to the aperture. However, the 100mm has a “huge” factor going for it which predominates my opinion of the 50mm E: shootability. There will be a standalone section in the review comparing these two lenses (along with editing the section into the 105mm review), but I do feel that the (probably) better image quality of the 105mm will outweigh the 100mm’s shootability, though not by too much. This is strengthened by the fact the 105mm isn’t terribly heavy if taken by itself–only by comparison.

Regardless, I’ve been rambling too long. Enjoy some pictures. I will be doing a couple more posts this week with other shots and stories from the fair as well (I don’t want to bore you with too many pictures in one post!). So, to keep things interesting, each post will be themed. Today’s theme will be “interesting people”, which there were plenty. 🙂 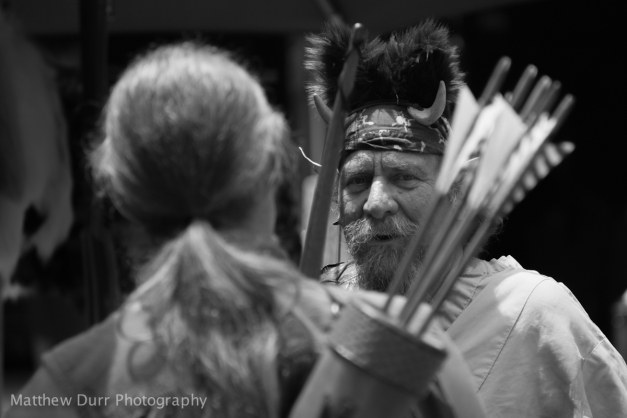 That’s all for this post, hope you enjoyed the photos and impressions so far. For updates on future posts, be sure to hit that little “follow” button and you’ll be all set. I believe tomorrow’s theme will be “Interesting Objects”. Should be fun. 🙂

Comments welcome, and as always, have a great day, thanks for dropping by. Review will be up over the weekend. 😀